Player
Hugh Leal has been active on banjo and rhythm guitar since 1970 when he played frequently all over Detroit in The Red Garter Banjo Band. Since that first professional performing, Leal has continued playing, leading dixieland combos in Windsor and Detroit for many functions. From 2001 to 2008 Leal toured as guitarist and road manager in trumpeter Marcus Belgrave's Tribute to Louis Armstrong and since 2005 in the same roles with clarinet prodigy Dave Bennett's Tribute to Benny Goodman. Leal has played these concerts in thirty-five US states, Canada and Puerto Rico and with over thirty orchestras for symphony "pops", including  Detroit, Toronto, Nashville, Vancouver and in 2013 at Carnegie Hall with The New York Pops featuring Dave Bennett. 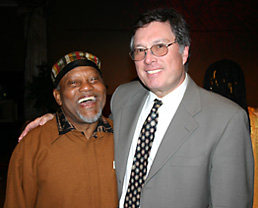